Move your SharePoint IIS sites from the systemdrive(C:)
or avoid putting them there in the first Place.

Do you see the lion that is totally in the wrong Place…or is it the Jeeps that are…?

This time, I’ll try to show you how to avoid the messed up situation most SharePoint installations are in, with everything on the systemdrive, or C:
Now, us people have over time been better and better at one thing, we understand that the logfiles should not be located on the systemdrive, so we have learned over time to move the ULS log and the Usage and Health log from C:, some have even been clever enough to move even the IIS log from C:

It not very strange though, the developers of Windows Server have made a point out of not giving us an option to install inetpub on a different path, not unless you do an unattended installation or otherwise script or Control your installation. The ‘Add/Remove roles’ wizards in Server 2008, 2008R2 and 2012 all lack this option (for a reason).

So, why would we want to do this anyway
why move the inetpub and all of its content, or at least the separate site catalogs to a different drive?
– Separation (Performance and Security)
– Compartmentalization (Performance and Security)
Having averything on the same drive is bad for a few reasons, primarily performance and security. Perfomance since the OS is on the C drive and security because if an attacker by some means gets access to a different less secure applications sitecatalog, they also get access to the systemdrive and possible also all other webapplication sitecatalogs. Moving them to other drives, same or different, helps mitigate both possible issues.
I therefore recommend doing this:

Do your regular installation, add the Web Server role and let the inetpub folder end up on C:, like I said, no worries. Whats important for us will not be located there anyway.
Next, edit the registry to make the default location of inetpub be for example D: (unless this is were you will be putting all of your logfiles, then select a third or fourth drive)
Install the SharePoint as you would normally do, Central administration will now end up were you pointed the default location.
Create your Web Applications using the GUI or PowerShell and leave out the path, the IIS sites will be were you wanted them.

So, how do we do this in more detail? A Guide…

On all of your web servers in the farm, and on your Central Administration server(s), edit the registry key that Controls the default location:

Start regedit by, Right clicking in the very lower left corner and you will get a list of actions, click on Run.

In Registry Editor, we locate the following path: HKEY_LOCAL_MACHINE\SOFTWARE\Microsoft\InetStp 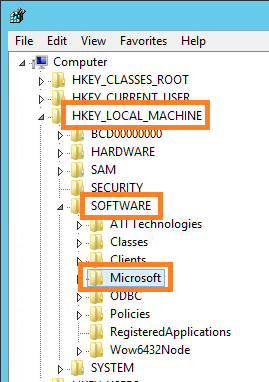 Under ‘InetStp’ we have a number of keys.

Locate and Edit the key PathWWWRoot from the default: (%systemdrive%)

There you go! All set, no IIS reset or restarts of any kind required.
Like said before, go on and do this on all servers that will host a webserver (WFE or CA). If you don’t, then you will have an inconsistent setup making Everything very hard to setup and t-shoot.

2. Add SharePoint
After this has been changed on all of you r web servers, you can go ahead and install the SharePoint binaries and configure your farm, The Central Administration site will now be located on the drive you have specified, it will be in the exact same path as it normally would but on a different drive. For example: ‘D:\inetpub\wwwroot\wss\VirtualDirectories\20000\’

Note that the Central Administration UI will now be default suggest a different path:

If you create a new site using PowerShell, it will also by default put it in D: even if you don’t specify any path:

For the logfiles, I’ll make a separate post, they should also be moved, more so even than the sitefolders. Logfiles will fill up the disks, they will slow performance and maybe most importantly, they contain delicate information that you want to keep separated from the OS and IIS.

Guidance for relocation of IIS 7.0 and IIS 7.5 content directories
http://support.microsoft.com/kb/2752331

Yup, this is me! View all posts by Thomas Balkeståhl

3 thoughts on “Move your SharePoint IIS sites from the systemdrive(C:)”